Menu
Log in
Register
Install the app
You are using an out of date browser. It may not display this or other websites correctly.
You should upgrade or use an alternative browser.

Forum
Last Post
Threads / Messages
Its been a long time since the last blog I made for Mys v1.3.4, and lately I found that all the screenshots became unavailable due to tinypic shutting down. Fear not, we are moving on to a new stage now. And this time I will introduce the Multi-Alternate Adoptables Form feature which will be available in Mys v1.3.5, the next minor release.

As most users of Mysidia Adoptables already know, the old system worked in a way that only two possible forms could exist for a given adoptable - the primary and alternate form. The latter can be selected at a given chance when leveling up. The downside is that it would not allow multiple alternate forms for adoptables, and the chance based selection is not very flexible. The new multi-alternate form feature will address the issues and make it more interesting.

In Mys v1.3.5, at Admin Control Panel(ACP) you will find a new item at the left menu: Adopt Alternate Form, as shown in the screenshot below: 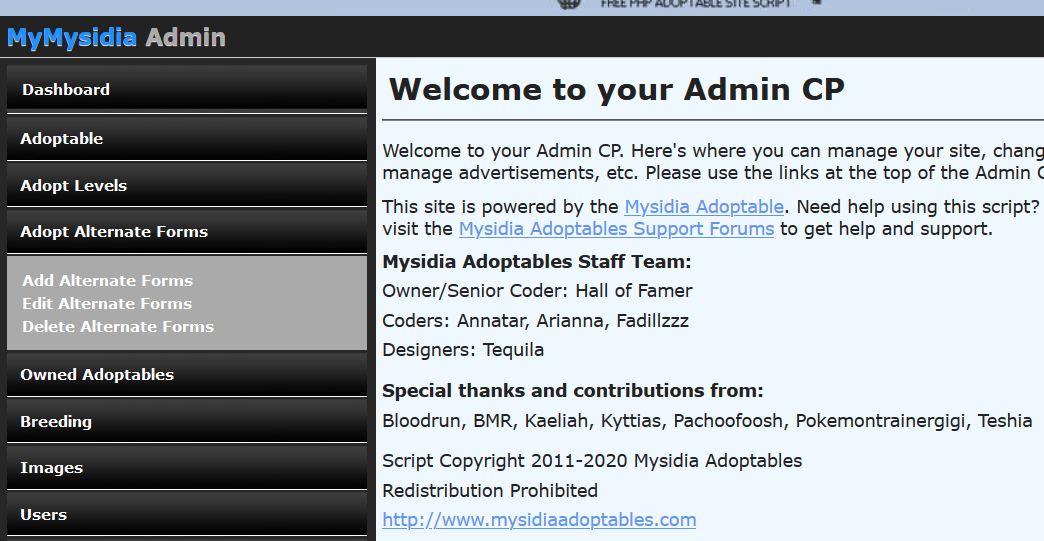 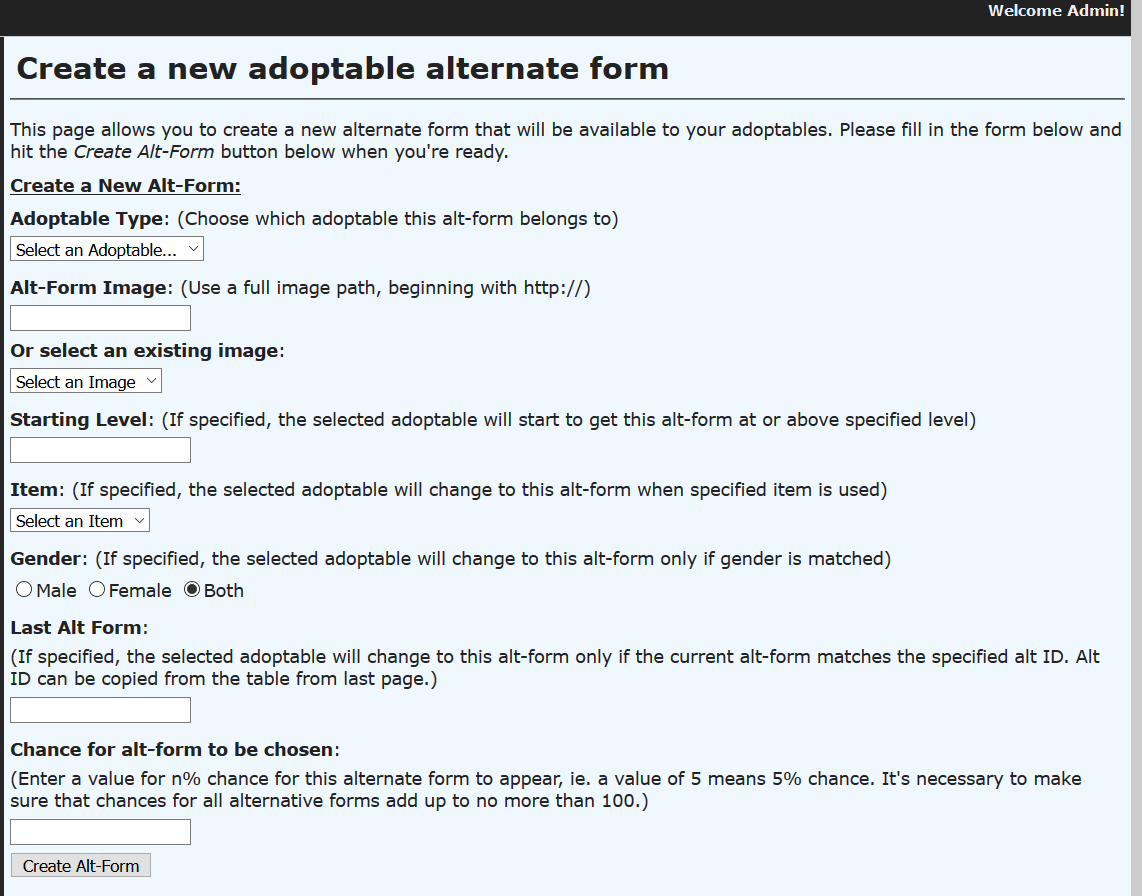 On the form you will need to select the type of your adoptable, provide an image for the alternate form, specify the starting level that this alternate form may be used, as well as the chance of this alternate form to be selected. These fields are similar to what the old system has, which should look familiar to you.

Upon submission of this creation form, we will successfully create a new adoptable form. To see all alternate forms for a given adoptable type, go to the Edit Alternate Form link and select an adoptable type. You will see this following table on the screen:

You may view, edit and delete alternate forms for your chosen adoptable type. It is ordered by level, which I believe is a logical choice for display of the table. The Alt ID value is the ID of your adoptable's alternate form, which can be used to specify the Last Alt ID field for the last form.

Note this table also shows all the primary forms for reference, but it is not possible to edit them from this page. In order to edit primary forms, you need to edit the levels for your adoptables(where primary images are specified).

Now you may wonder, how the random number generator works for our new adoptables alternate form system. It is actually not so complicated, but we apply a series of filters.

The generation of alternate form still happens upon leveling up an adoptable(except for item based alternate forms). First of all, the script will attempt to find all available alternate forms available for the new level of a given adoptable. If nothing is found, the primary form is selected.

The below screenshot shows that 3 different forms of adoptables can be selected for a given adoptable:

For item based alternates, you will just need to specify the item used for the adoptable form from ACP and use your item on your adoptable. Its possible that one item can be mapped to multiple adoptable forms too, in this case they will be randomly selected based on the chance field.

Now we've reached the end of the introduction for the Multi-alternate adoptable form system. Get any questions? You can either make a comment on the blog or just make a thread at Questions & Support subforum. I hope you will all enjoy this new feature, and have a great weekend.
Share:
Facebook Twitter Reddit Pinterest Tumblr WhatsApp Email Share Link

D; You exist! (I still get email alerts for Mysidia, so you can definitely expect me back for the next official release.)

Kyttias said:
D; You exist! (I still get email alerts for Mysidia, so you can definitely expect me back for the next official release.)
Click to expand...

Yeah its been a long time, and nice to hear from you too.

The next release will happen soon, and I am planning on the next feature other than Multi-alternate forms. The two main features for Mys v1.4.0(adoptables stats and clan groups) will definitely not be in any minor versions of Mys v1.3.x, but other features(especially minor and easy to implement ones) may be added.

More entries from Hall of Famer